Given all the facts, it might sometimes feel like you're forced to choose between your career and your good health. Thankfully, an ergonomic answer for the beleaguered and desk-bound modern worker exists in the form of the standing desk.

Numerous studies in recent years have tied the regular use of a stand-up desk to decreased risks of obesity, diabetes, colon cancer and many other serious medical disorders. As our work and leisure lives revolve more and more around screens, sit-to-stand desks have become an essential part of every health-conscious home and office.

One of the biggest reported benefits of a standing desk is that standing all day is much healthier than sitting for eight hours. For most people, being able to burn calories with a standing desk is a good tradeoff for being on your feet all day. However, do standing desks burn more calories?

At this point, the scientific evidence is omnipresent to the point of becoming irrefutable. But, unfortunately, we are sitting too much at work and at home, and it's doing terrible things to our bodies and minds.

New findings even indicate that regular exercise may not counteract the negative health issues associated with prolonged periods of daily sitting.

With sitting once labelled a "lethal activity" by Dr. James A. Levine of the Mayo Clinic, and with the top contemporary jobs requiring hours upon hours of face time in front of a computer screen, the situation may seem hopeless.

Workers today burn fewer calories at work than their counterparts from decades past, mainly because the good jobs in the information age often involve sitting in front of a stationary computer screen for the entire day.

Their findings showed a direct correlation between a person's annual salary and the number of hours they spend working at a desk. 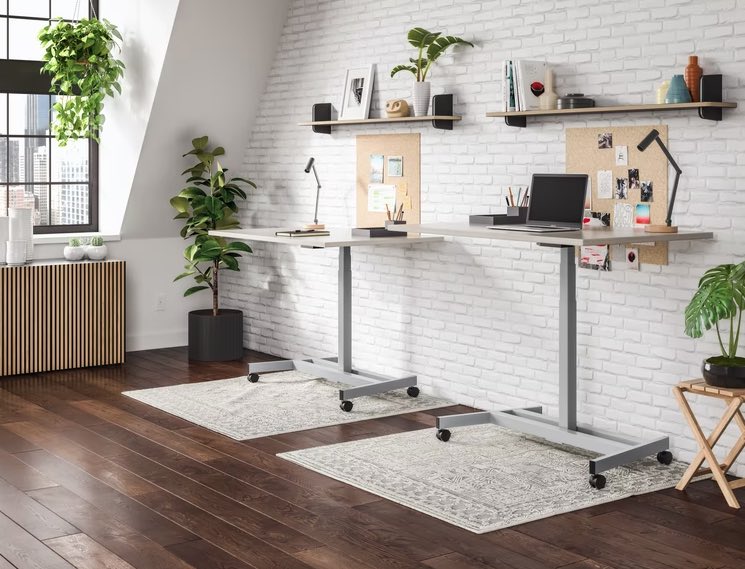 First Things First: What Is A Calorie?

Unfortunately, calories are not something that you can pick out of your food like raisins from a potato salad. A calorie is a unit of energy that measures the amount of energy stored in food.

The "calories" that most of us are familiar with, which we read on nutrition labels, are technically called "kilocalories." One kilocalorie is the amount of energy required to raise the temperature of a kilogram of water by one degree Celsius. Read more.

Contrary to their bad reputation, food calories are good for us. They provide essential energy to our bodies, giving us the fuel that we need to remain healthy and active. However, if you consume more calories than you burn off through physical activity, those excess calories get stored in the body as fat.

That's why a balanced diet and regular activity are essential to maintaining our long-term physical, emotional and mental health.

How long should you stand at a standing desk?

Some research has suggested that standing burns more calories than sitting, which may explain why you've seen more standing desks around your office. However, most of that research looked at each activity (sitting and standing) in isolation. The current research team reasoned that most people were doing a combination of activities or the activities in different orders and decided that merited a look.

To that end, they recruited 74 young, healthy volunteers to participate in a series of carefully choreographed experiments. First, the participants were divided into four groups and directed to sit, stand, or do different walk-in sequences.

The first group sat at a computer, typed for 15 minutes, and then stood. The second sat while watching TV for 15 minutes, then walked on treadmills. The third group stood then sat, while the fourth group walked before sitting. Each activity was separated by a 3-minute "transition" period during which the person was "seated at rest, not fidgeting, just relaxing," explains Creasy.

Does a standing desk count as an exercise?

Standing doesn't count as exercise, and, unlike running or cycling, no evidence was simply standing at work improves cardiovascular health. In fact, the latest science suggests a lack of exercise, not sitting at work, might be the bigger health problem overall.

Why do people disagree about the calories burned by standing at desks?

Hundreds of studies have attempted to measure the calories burned by standing instead of sitting. However, the results have varied widely due to differences in the subjects and the scientific methods involved in those studies.

There is one consistent finding: day-after-day spent passively sitting is one of the worst things that we can do to our bodies. Any activity at all, even standing still, is better for us than sitting.

However, while standing certainly burns more calories than sitting, there have been profound disagreements about how many more calories are burned. In addition, some widely reported studies on the subject have been questioned or discredited due to their limited scope, small sample size or lack of controls.

One widely reported study by the University of Iowa in 2015 found that workers who used adjustable standing desks typically stood one hour per day more than their sitting-only colleagues and that they burned 87 extra calories per day.

Many people took these findings to mean that sit-stand desks burn 87 calories per hour. However, a good amount of that additional calorie burn was because stand up desk users also walked an average of six minutes more per day at work than those who used a traditional, non-ergonomic sit-down desk.

Although the standing desk probably deserves credit for encouraging movement and enhancing energy in those workers, walking burns more than twice as many calories as either sitting or standing. 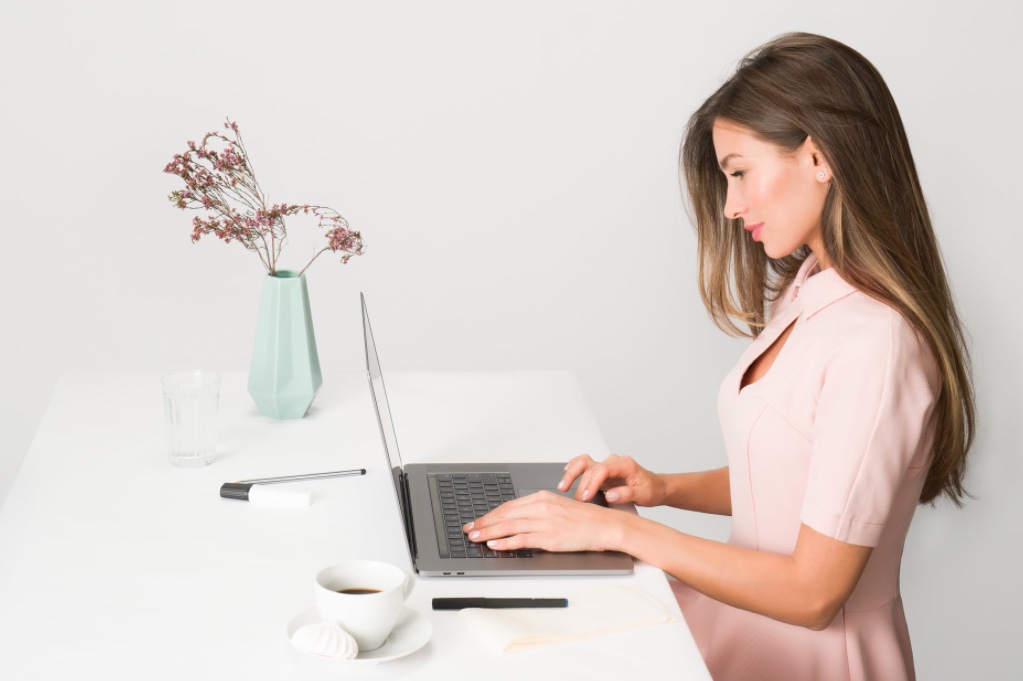 Sitting and standing while working burn more calories than sleeping or passively sitting. How do they compare to other activities, such as cooking, gardening, or playing hopscotch with your kids? Check This Out.

Here is a breakdown of the average calories that various physical activities burn over the course of fifteen minutes:

The above results for sitting, standing and walking came from the analysis published in Circulation. At the same time, the other totals were provided by Harvard Medical School and indicated the average calorie burn for a 155-pound person.

Remember that these numbers are only averages and that we all burn calories differently based on our individual size, metabolism and gender. For example, due to differences in muscle mass, standing men burn twice as many calories on average as standing women.

How can you increase the calories that you burn at a standing desk?

As we have seen, standing at work does burn more calories than sitting. Still, the difference in energy expenditure between the two is relatively small when compared to other physical activities.

That said, there are plenty of ways to increase the calories you burn at your standing desk without interrupting your workflow.

Don't Be Afraid To Fidget

If you want a little extra boost to your calorie burn, just ignore everything that your parents and teachers ever taught you about sitting (or standing) still.

Regular movement keeps the blood flowing and the calories burning, so shift around in your seat, twitch whenever you get the chance, and twiddle as your health depends on it.

It is no longer necessary to choose between doing your desk work and doing your daily cardio.

Do some calf and leg raises while sitting down, then do some deep knee bends or lunges while standing up. Stay limber and loose to prevent muscle fatigue, and you will have no trouble standing at your desk for several hours a day.

People who work at desks should take a short break and move around for a couple of minutes every half an hour. Regular movement is the greatest gift that we can give to ourselves, so push yourself away from the desk and move around at least once every thirty minutes.

Use A Calorie Counter

Find an online calorie counter or a fitness app and track the hours that you spend sitting and standing every day. This will not only inform you how many calories you burn when standing, but it will also remind you to shift between sitting and standing positions throughout the day.

If you're not afraid to turn your office into an Olivia Newton-John video, find a chair aerobics workout and start building up a real sweat. A sturdy and supportive ergonomic chair will only enhance your workout. Click site. 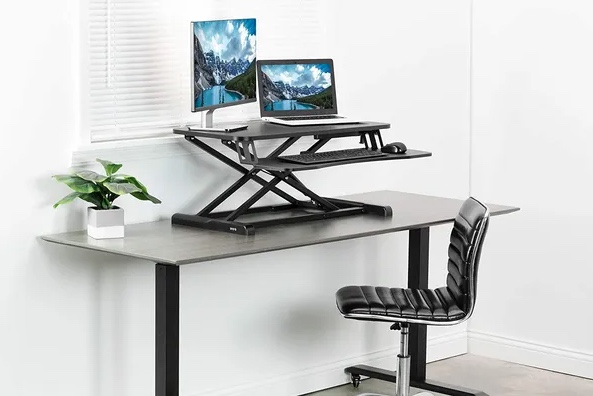 Upgrade to A Standing Desk

Still, if you believe that those extra 100-200 calories an hour can help you get your weight loss and that every little bit helps, you should upgrade to a standing desk to lose a bit of that extra weight. It can be a bit of a transition, but once you get your body used to standing up while working, it can seriously start to burn some extra calories for you.

Pick the right standing desk for you to achieve standing desk calories burned, add some exercises and physical activity to it, and then get comfortable watching the number on the scale drop. Who doesn't love that feeling whenever they weigh themselves?!

Standing desks won't make you lose weight, and they also don't make you significantly healthier or more productive, according to a new analysis of 53 sit-stand desk studies.

How many extra calories do you burn with a standing desk?

According to the new study, standing only used a whopping two extra calories on average. That translates to an extra 8 to 10 calories for every hour on your feet. However, the difference was not statistically significant—and it's probably not enough to affect your weight, says study author Seth Creasy, Ph.

More calories burned: One study showed that standing sheds 88 calories an hour, compared to 80 calories for sitting. Walking burns a lot more -- 210 calories an hour. Less back pain: Sitting for long periods tightens your muscles and can hurt your lower back, especially if you have bad posture.

Are standing desks good for gaming?

Standing offers proven physical benefits that include reduced back, neck, and shoulder pain, improved blood circulation, increased energy expenditure, and better posture. These should all lead to healthier and happier gamers.

Should you use a standing desk all day?

Sitting behind your desk all day is bad for your health, and experts have long been advising people to stand at their workstations for about 15 minutes an hour. But a University of Waterloo professor says his research shows that people should be standing for at least 30 minutes per hour to get health benefits.